Fear Pong is one of the best Beer Pog variations and a great extension to the traditional game. 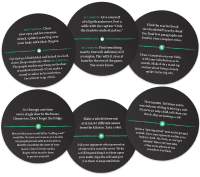 While everyone loves to play classic Beer Pong, we’ve tried to find a way to lift the legendary game to another level. While doing so, we’ve stumbled across a
game that claims to do that – Fear Pong

Things you need for the game:

The game is an extension to Beer Pong. It is intended to make the game even more fun and entertaining. This is done by placing a tile under each cup. On these cards, there are tasks, so-called dares. When a cup is hit, you can decide whether to drink the cup or perform the task. If you decide to do the task, it is removed from the game. The next time the cup is hit, it must be drunk.

So, the dares serve as a kind of second life for each cup. If you complete each task, you haven’t lost until your opponent has hit each cup twice.

While we still love the classic Beer Pong game, we have to admit that Fear Pong is a nice extension. Without a doubt, it is one of the top Beer Pong Variations we’ve played so far.

Want to find more drinking games based on the player size, material, or many other factors. Click here and find the best drinking games for your party night.

Be the first to review “Fear Pong” Cancel reply

Added to wishlistRemoved from wishlist 0
Add to compare
9.3

Added to wishlistRemoved from wishlist 0
Add to compare

Sotally Tober is a fun card drinking game. It’s one of our favorite pre-gaming games and a must-have for any party. Check it out now!