This game is meant to be a kid’s game. However, it is surprisingly fun to play as a drinking game. All you need to play is this game, luck, and quick reactions. keep the concentration high, then your friends are guaranteed to get shitfaced 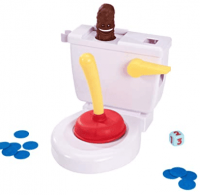 “Are you serious, nobody wants to play this weird game”

This was my brother’s initial reaction when I suggested testing and rating this game. And guess what, you read this, so at least we caught your attention.1:0 for me!!!

Admittedly, this game takes some getting used to, but it’s a lot of fun, just like other kids’ games that are turned into drinking games.


As I said before, my brother was everything but enthusiastic about Flushin’ Frenzy. That’s exactly the reason why I bought it for him when we played White Elephant (it is like Secret Santa, but you have to give shitty presents). What could be a better present for this occasion than this game? We tried the game and it actually was more fun than expected. The idea behind it is pretty much the same as with Crocodile Dentist, however, in that case, quick reaction skills and concentration are added. So, I can’t believe to say that, but this is one of my favorite games in that category.

Are we serious about putting this game here? Of course, we are! We get your point, it might not be the classiest game, but we never claimed to try to introduce you to the classiest games. In fact, this game might be the best if you want to see your friends getting shitfaced…..quite literally.

Check out many more great board drinking games here

Be the first to review “Flushin Frenzy” Cancel reply

This site uses Akismet to reduce spam. Learn how your comment data is processed.

Added to wishlistRemoved from wishlist 0
Add to compare
6.9

Added to wishlistRemoved from wishlist 0
Add to compare