Darts is a classic game to play in bars. This mini darts game is the perfect mini-game to play at home partys. Get ready and show your aiming skills.

Those who love Darts and regularly watch the world championship in the legendary Ally Pally, know that a big part of this sport is the atmosphere. Party, fun, crazy costumes, and one or the other beer make this event so special. This is exactly where this skill drinking game comes in. In contrast to the professional Darts players, you will probably not get cheered on by hundreds of drunk people, however, you won’t need that as you’ll be drunk yourself pretty soon. 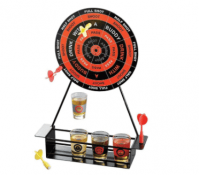 Awesome mini game that allows you to show your friends who is the boss
Players: 2-6
Materials: Mini-darts game
Time: 5-40 minutes

This skill drinking game is self-explanatory for everyone who knows how to play darts (and for everyone who doesn’t). One player after the other throws the dart at the target. In contrast to real Darts, only one dart is thrown per round. Next, just read what the field you hit tells you to do. It is as simple as that, but make sure you appoint a referee who helps to read in case you lose this ability after a while.

Try to start slow as this darts drinking game gets you hammered rapidly.

Magnetic Darts is a funny game for parties and a great idea as a gift for the host of a party. It is fast-paced and guarantees to get people drunk rapidly. We had great fun trying the game, however it is not a game to spend your time for more than one or two rounds. Still, after putting it away for a while we use to get it out of the closet after a few weeks or month to play it again.

Want to find more drinking games based on the player size, material, or many other factors. Click here and find the best drinking games for your party night.

Be the first to review “Mini Darts” Cancel reply

Editor choice
Added to wishlistRemoved from wishlist 217
Add to compare
7.5

Yes We CAN – The Leaning Tower of Pisa

You Spin My Head Right Round

Added to wishlistRemoved from wishlist 218
Add to compare

Drunken Fool is a foolishly awesome card drinking game for your party. Best played with 2-8 players, it is perfect for pre-gaming or to take away to bars and partys. Now on SALE!