The SipMaster drinking game is a true game-changer for pregaming and homepartys. Download the free app and buy the SipMaster or play it with a kitchen scale. 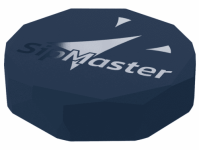 Awesome mini game that allows you to show your friends who is the boss
Players: 2-12
Materials: SipMaster App + SipMaster/Kitchen scale
Time: 1-40 minutes

SipMaster is a revolutionary drinking game in which your sip size is measured using a scale. So how well you do in the competitions of the different game modes always depends on your drinking game skills, not on dice or card luck. Estimate your sips more accurately than your friends and become a SipMaster!

Once you download the drinking game app (Android / iOS), you can play various games and categories including:

When playing the SipMaster drinking game, you’ll win by accurately drinking a certain amount of your drink. Depending on the mini-game you choose, there are different ways to win.

This is the mini-game we suggest playing first to get a hang of the game. You’ll have to hit different target areas to pass to the next layer.
These layers are 10-30 ml, 30-50ml, and 50-70ml 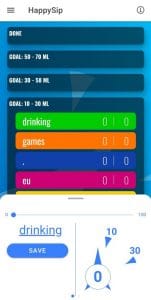 This is the easiest and fastest-paced mini-game. One player specifies an amount between 10 and 100 ml. The goal is to drink more than the specified limit, but stay as close as possible. The player who is over the limit, still the closest one wins. The player who drank the most loses, however, they can choose the next limit.

Additional rule: We figured out that it is great fun to punish those who drank too little with an extra shot. 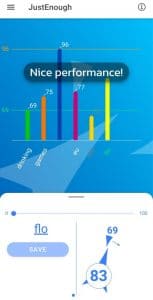 In this game, players have to increase the amount that was taken step by step (10 ml each). Each player starts trying to drink between 10-20 ml. 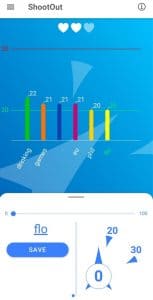 Players start with 180 and the goal is to reach 0 first. In each round, you can drink an amount between 9-60 ml. This number will be subtracted from your current “points”. In this game being accurate at the end is key. If finish below 10 but did not reach 0, your “point” will always be set back to 10. The same is true if you overscore.

You can change the level of difficulty so that you won’t have to accurately hit the 0. 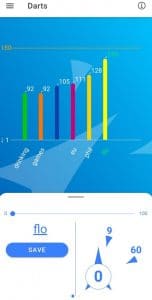 Las Vegas consists of 6 rounds in total. If you’ve seen Squid game, you might be alarmed by that number of rounds (by the way, check out our squid game drinking game). Don’t worry you won’t be “eliminated” in that game.

This drinking game is truly different from most of the other games we’ve played so far. A great combination of skill and tactic makes this game exciting and funny at the same time. Moreover, and in contrast to many other drinking games, luck plays a minor role. SipMaster has quickly turned into a game that can’t miss at any of our partys.

By the way, you can buy the SipMaster as the number one option, but you can also play the game with a common kitchen scale. Just download the free app and get started.

Be the first to review “SipMaster Drinking Game” Cancel reply

This site uses Akismet to reduce spam. Learn how your comment data is processed.

You Spin My Head Right Round

Added to wishlistRemoved from wishlist 1
Add to compare